Do you have calculosis in cattle and sheep, or malnutrition in cats and dogs? Or fear of post-partum paralysis, low blood calcium?

Today Jianghai engineer introduce you a calculosis killer for ruminant-Feed Grade Ammonium Chloride. The ammonium chloride is divided into several categories according to the needs of different industries, such as feed grade ammonium chloride, which can be used to add food such as cattle and sheep, so what circumstances should it be added to the feed? What is the effect of using it? 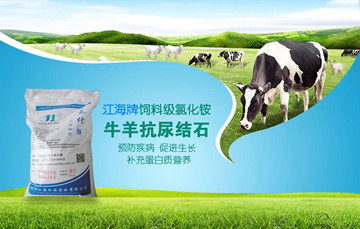 In addition to being added as non-protein nitrogen to the feed of ruminants, it is also widely used in veterinary medicine. Although feed grade ammonium chloride can be used as food supplement for animals such as cattle and sheep, it is necessary to pay attention to the amount of addition according to the size and variety of the animal.