In commodity fattening cattle diet, to join two levels by or sulfuric acid by chloride, make its diet contain basically the same nitrogen source, energy, and the same level of calcium, phosphorus, and salt.And then feeding experiment, after 112 days, every diet group of fattening cattle basic similar total weight.Only contain chloride according to higher levels of diet group (per head per day dosage 3.0 ounces) of feed remuneration raised, this group of weight gain cost about saving $3.77 per head than the control group.​

Experiment shows that when 1% of ammonium chloride and ammonium sulfate is added to the food, can be used as a source of non-protein nitrogen (NPN), found no ammonia poisoning. From the feed, weight gain cost and the incidence of liver disease, high levels of chloride in the diet group is more better.

Clawson and Alsmeyer also reported the ammonium chloride in pig feed in the diet, to improve the pig feed remuneration is also very significant.

The test of fattening cattle was conducted livestock farm in western Texas.Selected 46 fattening cattle head hybrid varieties of goods, the group comparison test.The control diet basically adopts the livestock farm the provisions of the standard, and according to the food and drug administrative committee about the regulations on the use of ammonium chloride, excluding tetracycline or materials such as growth hormone: test the diet formula is calculated by the computer at the lowest cost.Basic ingredients have grain, purple flower and fat, the other supplementary cottonseed cake, urea, salt, calcium carbonate, apatite, choline, trace mineral elements and vitamin A, D and E, finally add chloride sulfate or the money.In order to make the groups contain are basically the same levels of calcium, phosphorus and salt, a variety of ingredients to add quantity is not the same in each group.The diet dry matter content of 8 bowel, every head low ammonium chloride 0.75 ounces (21.3 grams) which is used for the content of urinary calculi;And every high level according to the chloride content is 3.0 ounces (85.1 grams), is used to determine ammonia poisoning experiment.And at the same time of the ammonium sulfate with equal nitrogen level to add, were 0.9 and 3.6 ounces. 112 days after the end of the trials, the carcass inspection, including the level of carcass, the determination of pesticide residues and liver disease symptoms, the results were not found ammonia poisoning phenomenon, and do not affect meat quality.

In groups of basic consistent case, the total weight of feed consumption group with high levels of ammonium chloride as a minimum, the other set of basic phase approximation.High levels of ammonium chloride group compared with control group, each about a day to reduce feed cost 2.5 pounds (1.1 kg), as a result, the total weight of the cost, greatly reduced than other groups, each head of cattle, the provincial feed costs $3.77 per day.From the carcass inspection results bar diet cattle feed containing ammonium chloride, slightly worse than the control group on the slaughter rate;The cattle feeding sulfuric acid in the diet, while carcass level improved, but due to hepatic ulcer, incidence of liver disease increased five times. 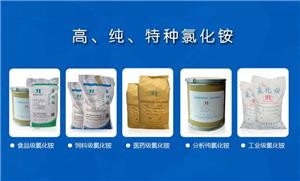